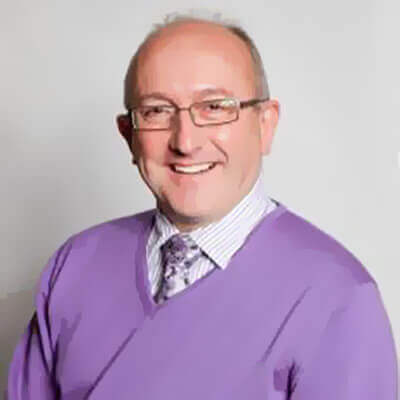 David Ricketts qualified at Guys Hospital Dental School, London, now GKT Kings College, London in 1986. He worked in hospital and General Practice for two and a half years and returned to Guys Hospital to study for an MSc in Conservative Dentistry in 1989. During this period his main research interest in Cariology, and in particular caries diagnosis and its appropriate management, began and led to a PhD which was gained in 1995. He has published widely in his research area and in other aspects of restorative dentistry and has spoken on such topics worldwide. His research has led to collaboration with colleagues in numerous European Countries, the Middle East and North and South America.

In 1999 David moved to Dundee and was promoted to Senior Lecturer / Honorary Consultant in Restorative Dentistry in 2003. In 2006 he became leader of the Section of Operative Dentistry, Fixed Prosthodontics and Endodontology at Dundee Dental School and in 2007 became Professor in Cariology and Conservative Dentistry.

David was Associate Editor of Caries Research 2010 to 2014 and sits on the Editorial board of Dental Update. He has contributed to a number of text books on Cariology and is the joint Editor and contributor to two text books on “Indirect Restorations” and “Advanced Operative Dentistry: a practical approach”.

In 2013 he and his co-authors completely re-wrote a Cochrane Systematic review on Operative caries management in adults and children. This review challenges conventional wisdom of complete caries removal during cavity preparation and has implications for the management of deep caries in helping to preserve pulpal health.

Abstract
In contemporary practice, dental caries should be managed preventively, but if this preventive approach fails and the lesion progresses a decision has to be made to remove caries and treat the lesion operatively. Knowing that operative intervention has an impact on pulpal health, this presentation will give evidence for when a dentist should treat a tooth operatively, it questions accepted teaching in relation to how much caries needs to be removed and indeed does an indirect pulp cap exist or is this synonymous with today’s conventional cavity preparation. In a tooth with no signs or symptoms of pulp pathology and a deep carious lesion, conventional caries removal can lead to pulpal exposure. The prognosis of a direct pulp cap in such a situation will be briefly discussed and the presentation will challenge whether the carious lesion can be treated in such a way, based upon the microbiology, structure and behaviour of the lesion, with an aim to minimise pulpal damage and hence preserve the vital pulp.